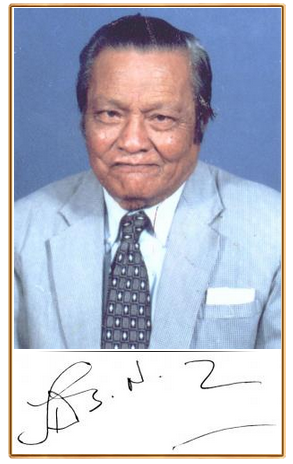 The quiet hillock of Jaiaw Lumsyntiew was again bestirred with excitement as yet another child was born to educationist Mondon Bareh and Besina Dkhar on the 3rd May 1931. They decided to call him Hamlet – a son who would have made his father proud, but alas, Mondon Bareh did not live to even see his son start school. He died the very next year.

So Hamlet Bareh, the last born of ten children, was brought up by his mother who watched over him tenderly and whom he grew very attached to. Being the youngest and an obliging boy at that, he was often running errands for everybody else, especially his siblings, and helping out with all the household odd jobs which included wood chopping, cleaning, marketing, cooking and gardening. Far from being spoiled! This apart, as the youngest of a big family without a father, he did face many prejudices and impediments regarding education which almost hampered his career.

Those were the days of hopscotch, hide and seek, tug of war, bird netting/trapping, and fishing, with no nonsensical luxurious video games, or for that matter even television. And though he was not overly fond of sporting with other than those in the family, Hamlet did enjoy these. Indoors, he joined them in board games. When he was older he got into badminton which he was good at.

Then there were the musical sessions with family and friends – playing on different instruments and singing together. Doing justice to being part of a music loving family, he picked up playing tunes on the piano, violin and mandolin, and also learned the tonic sol-fa. He even helped to play the organ at church services as a youngster, and later on gave performances with his fellow students as a college boy.

He was sent to Jaiaw Practising School where he finished his primary schooling before moving on to Khasi Jaintia National School for the middle school, and then finally finished off at Shillong Boys’ Government High School. He then graduated from St. Edmund’s College, Shillong.

As a college student, he got into organising action songs, plays and drills for children on stage, and special songs which were sung at the local church’s (Jaiaw) special functions. Incidentally, he was made class representative to a year long college union. Perhaps it was all this creativity which took him to the position of being the head of the university centre for creative arts – the only one in India.

The closest university to home was at Gauhati, so he promptly went there to pursue a master’s degree, but was also awarded the Doctorate of Philosophy on account of his thesis – The origin and history of the Khasi People. This would do him proud forever as he is the first ever amongst his people to ever get the PhD, and indeed, one of the very first among the hill tribes of north east India. The then Prime Minister of India, Smt Indira Gandhi wrote him a congratulatory letter on this.

In the mean time, as studies were going on, he had got into work experience – as a teacher at the Government High School in two different years, and as publicity officer and lecturer at the Union Christian College. The latter gave him a lot of scope in travelling, as well as speaking in public meetings as the UCC was still trying to expand and strengthen its branches all over the north east. After getting his master’s degree he worked as lecturer in both Khasi and History at St. Edmund’s, Shillong, plus helped at the Post Graduate Institute as well as the BT College.

After he was fully equipped with the Ph D he went on to be editor of the District Gazetteers of the North East Frontier Agency (present Arunachal Pradesh), and then of Nagaland. The years 1973 and 1974 saw him as the visiting fellow of the Indian Institute of Advanced Studies in Simla (presently Shimla).

The year 1974 is a milestone in the North Eastern history: the year when the region got its own university-the North Eastern Hill University headquartered at Shillong came to being in the latter half of the year. So of course, Dr Hamlet Bareh Ngapkynta was invited to be the Reader & Head of the Continuing Education and from time to time oversee the running of the department of Adult Education as its head.

In 1977 he took over as the Reader & Head of the Centre for Creative Arts, and was in 1985 promoted to Professor & Head of this department until he retired in 1996. It may well be mentioned again that this is the only department available in any university in India.

And side by side with work, he directed his energy to voluntary social, creative and educational activities. He was made secretary of North East India Christian Literature Board and also represented the North East Council at a national meeting in Nagpur. He also helped in the starting of the Synod College in Shillong which involved travelling to villages in order to enlighten people on the benefits of higher education.

He was made member of the India Council of Historical Research; the Sahitya Academy India; the Advisory Board of Art and Culture, Meghalaya; the advisory board of the State Council of Educational Research and Training, Meghalaya; and was even made one of the five members of the Expert Committee of the Sahitya Academy, India. Apart from these, he is a permanent member of the Indian Institute of Public Administration, Delhi; the Sardar Patel Society, Delhi; the Assam Research Society; as well as of the North Eastern Economic Association.

Work and travel did not hinder him from organising cultural shows, dramas (with special attention to folklore), musical events and exhibitions of indigenous crafts. I remember only too well all the hyped up activity and excitement preceding any of these! It maybe worthwhile to also mention that in honour of the great king and freedom fighter, Tirot Sing, he designed and had built the Tirot Sing Memorial Epitaph on behalf of the Tirot Sing Memorial Association and the Khasi Cultural Society. This epitaph is raised on two pillars and comprises an arch, a plate with inscription and topped with crowns, and one can find it prominently placed in the heart of the city just outside the State Central Library.

On a special project of the Union Government, he brought to light some names of freedom fighters of the North East. Consequently, their names were printed in the Who’s Who of Indian Martyrs, 1972 And then, of course, he also took charge as President as well as Secretary of the Khasi Cultural Society, through which he brought out the first ever Khasi film: Ka Synjuk Ri ki Laiphew Syiem, where he was able to incorporate one or two of the songs he composed as pastime.

The Khasi songs which he composed over the years are those whose tunes fall in line with the different Khasi drum beats (the Khasis have multiple ways of beating the drums). These songs have been sung at exhibitions and cultural shows, and also played as background music in the first ever Khasi film he produced and directed(as mentioned above).

Regarding writing, he has in recent years, extended what started with history and culture books to articles in various newspapers both in Khasi and English. On account of his vast research works and knowledge, he was also often invited to give talks over the radio starting right from 1959 till date, and in seminars and conferences dating from the early 70’s till as recent as 2001.

Meanwhile throughout the years, he has been invited to give lectures by institutions all over the country – the Delhi University, Gauhati University, India International Centre Delhi, Assam Sahitya Sabha , State Police Academy, to name only a few.

He was made Emeritus Fellow of the University Grants Commission in the year 1998 for his work The Economy of Meghalaya, perhaps the first from NEHU to be granted this recognition. On this work, this is what (late) Dr PN Chopra, Chief Editor, Collected works of Sardar Patel/Editor, District Gazeteers, Union Government, had to say: “…You have succeeded admirably to project the traditional as well as the modern characters of the economy which you rightly stated is due to the efforts of all communities particularly Jaintias, Garos, Khasis as well as other communities…I have great pleasure in testifying in your capabilities and to say that you are an authority on the subject now…”

He was recognised by the state government when he was conferred on the “U Tirot Sing Award” in 2004, and in the same year was awarded the prestigious Padmashri Award conferred on him by the Union Government and presented by Dr APJ Kalam, President of India. What an honour! It was indeed such an awe-inspiring, touching moment being there at the Rashtrapati Bhavan and watching him walk over to the President to get his well deserved award. I will be eternally satisfied for being there, applauding him and feeling so overwhelmingly proud and happy. I only regret and was deeply moved that my mother (whom we lost in 1995) was not there to share the moment.

Prof(Dr)Hamlet Bareh Ngapkynta, my father, has achieved too much and done too many things for education, for the society (social work & recognising and awarding deserving people), for the government and for the arts. Everything cannot be mentioned here. I have merely highlighted the main points and little snippets here and there. But I cannot conclude without proudly mentioning that his name was included in Reference International Asia Who’s Who “Men and Women of achievement”,1989, in Learned Asia Educationist Who’s Who, 1992 as well as in the Encyclopaedia Universal Lexicon Inc-New York, 1983. And five of his books can be found at the School of Oriental & African Studies Library, University of London, London., and i was fortunate enough to go see them, make photo-copies, plus take photographs, and sent them to my father in 2010.

This website is under construction. Articles on the person and on the works of  Dr Hamlet Bareh Ngapkynta are solicited for publication in this website. Persons so desirous can contact over the form in the CONTACT page
Powered by